After AV and election humiliation: what next for Clegg and the Lib Dems?

The result was crushing. A firm no to electoral reform and a pummelling at local level for Lib Dem councillors is a devastating double whammy. The road back to even slight popularity will be rocky and steep, with huge risks of even further falls on the way. The media were quick to pounce on the misery of Clegg and the tensions within the coalition. Whilst exaggerated, there is no doubt that the coverage accurately reflects a permanent shift in the dynamic of the parties in partnership.

Firstly then why was the defeat so bad? And why did the Conservatives not only escape punishment but considerably strengthen their position with gains? In many ways it is pointless to dwell on the results. What’s done is done. Liberal Democrats across the board are declaring the need to move on and get on with the job, seemingly out of bitterness, but also out of practicality and necessity. It is perfectly understandable however that some big names, such as Cable and Huhne, have lashed out at their Tory coalition partners in the dizzying spiral of disappointment and defeat.

They feel, rightly, that their party has become a human shield. They feel that they are victims of immense unfairness, ironic given that the core of their policies on tax, education and indeed the voting system, are intended to increase fairness. The Liberal Democrats had to enter into coalition with the Conservatives. Labour was never a viable or democratic alternative. A minority Tory government would have been ineffective and lacked any Lib Dem input on policy, whether as a restraining or creative force.

They were damned if they did and damned if they didn’t. Clegg would never have been forgiven had he passed up the chance to introduce a host of coveted Liberal measures. As I’ve argued before Clegg also saw an opportunity to open up politics. By showing that coalitions could work, the old seesaw between Labour and the Conservatives would be challenged. Consensus and cross party collaboration would produce broader ideas and solutions to the bigger issues, in a 21st century where ideology is far less important than results, to voters at least.

Where they went wrong is debatable. There are obviously a range of reasons. But primarily it seems to be that too much eagerness and what’s been described as “personal chumminess” between Cameron and Clegg, was on display. The broken promises therefore appeared to be callous and genuine deception, rather than an inevitable concession from the minority partner in coalition. On tuition fees the Lib Dems made the mistake of trying to claim that the new policy was a better one because of changes they instigated. They needed to make a greater show of their overwhelming reluctance to charge fees at all, whilst still championing the restraining measures for fairness that were their doing.

Ultimately it all comes down to Clegg’s economic gamble though. I am still not sure just how fully he buys into George Osborne’s interpretation of the crisis and his drastic solution. It may well be that privately Clegg still stands by his pre-election comments, that the deficit should be reduced gradually with a focus on growth in the short term.  Adopting the Tory approach could be the primary price of going into government for the Lib Dems. But publicly he has signed his party up to comprehensive cuts in public spending that are at odds with the instincts of most Liberals. And you’d have to say that Clegg must believe the Conservative plan will eventually lead to growth, because if it doesn’t his party will be battered once more come the next General Election.

Certainly earlier this year I wrote about a speech in which Clegg made the most compelling argument thus far in favour of extreme deficit reduction, which essentially boiled down to longer term sustainability and strength in diversity for the economy. I still think he may be torn though and that he might accept some of Labour’s arguments that claim a slower pace of cuts would have restored greater growth sooner.

With regards to the referendum on AV Clegg clearly made an error when choosing the date. The key reason for Yes2AV’s failure was that their argument became inseparably embroiled with party politics and the local elections. Clegg’s personal unpopularity rubbed off on the campaign for reform, mainly because of dirty tactics from the No camp. Yes2AV also made ridiculous unrealistic claims about accountability, rather than keeping their argument simple. Celebrities made a late push for reform at a rally but by then it was too late, the argument should have been made more forcefully outside of the political sphere weeks before May the 5th.

Of course the important and interesting question now is what do the Lib Dems do to recover? And how will this affect the coalition? Paddy Ashdown, the former leader of Britain’s third party, was on Question Time on Thursday. He spoke eloquently and with reason on foreign affairs, prompting cheers and claps from the bulk of the audience. But when it came to domestic politics he found himself bogged down by the harsh public opinion of Clegg, so very different from the polls after the TV debates over a year ago. He valiantly defended the courage of his party’s leader under fire but could only react with frustration when the audience flatly refused to hear him out.

Clegg continued to show that courage in an interview with Andrew Marr on Sunday. Given the pictures of his gloom and the mountain to climb left by the results, Clegg gave remarkably assured answers and honestly asserted that he’d misjudged things, and that the Lib Dems needed to have a “louder voice” in the coalition. He spoke of the need to sing about the unexpectedly high number of Lib Dem manifesto policies being implemented. But in many ways all this was predictable and necessary.

The efforts to give his party an individual and distinctive again will undoubtedly begin to heal the wounds of defeat. He needs to show greater reluctance when he must go along with Conservative plans, pick the Tory policies he does oppose carefully for maximum impact and point out measures that perfectly illustrate the moderating influence of his party. Clegg has already worked out that NHS reform is the best way to begin a recovery, threatening to block it and demanding changes are made to meet concerns. However what would really give the Lib Dems a distinctive voice back is to propose and explain policies they would be implementing without the Conservatives.

What I mean by this is to set out policies, on tuition fees for example, that the Lib Dems would implement if they had the ideal (but unlikely) scenario of a majority government. These policies should be calculated to appeal to Labour voters and those within Labour potentially open to coalition. The Lib Dems need to reach out to Ed Miliband or those around him with influence, to stop him pounding the human shields of the coalition as opposed to those in the driving seat.  A senior figure in the party, perhaps likeable President Tim Farron, should be chosen to run what would almost be an alternative Lib Dem opposition.

I accept this would be difficult to handle and could shatter trust and cooperation with the Tories. Many might say it’s impossible. But as long as Clegg and key Lib Dem ministers weren’t directly involved, the group did not challenge specific government policy and simply proposed Lib Dem alternatives not covered by the coalition agreement, there would be little the Tories could do to stop it. AV may be lost but the Lib Dems have plenty of arguments they can still make that are unique to them. They must take the philosophy behind AV, choice and fairness, and tie it to attractive policy. For example their manifesto went further on tax, transport, energy and the House of Lords. Choice is the key to freedom in a modern society and the Lib Dems must make the case for the state actively empowering individuals. The Liberals must show how they would liberate.

It’s probably better for Clegg to keep his head down for a while and continue to soak up pressure whilst his party recovers independently. Clegg’s popularity will take longer than his party’s to heal. But this does not mean he is the wrong man to lead it. He has for the most part taken bold decisions both in the national interest and to achieve greater fairness sought by his party’s voters. He has had to concede costly economic compromises, but to overcome these he must be bold again. Frankly after the tactics of the No Campaign, so wholeheartedly backed by Cameron, Clegg must dirty his hands a little. A louder voice will only convince dispirited voters if it hints at what the coalition is doing wrong because of the Conservatives, as well as what it’s doing right because of the Lib Dems.

Photos from my day at the Cottage: Fulham vs Everton Saturday the 26th September 2010 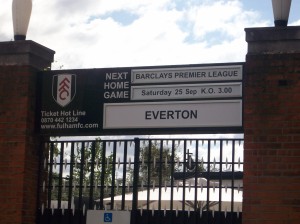 My first Premier League game in a while, and my first ever at the Cottage. Also a first for this blog, bloody visual images for your pleasure!

My first Premier League game in a while, at my first ever at the Cottage. Also a first for this blog, bloody visual images for your pleasure!